What Stroke Therapies Are Available for Patients? 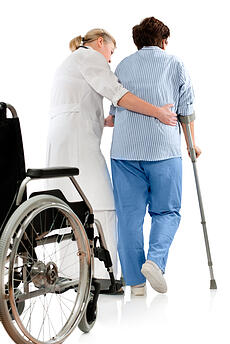 A stroke occurs when a blood clot in an artery breaks free, stopping the circulation to a specific region of the brain. During the event, not only is blood flow interrupted, but cells in the brain die as well. Strokes in the U.S. kill just over 130,000 people annually and often lead to long-term rehabilitation for those who survive. A stroke may occur at any time in a person’s life and is classified as either ischemic (the most common form) or hemorrhagic.

An ischemic stroke happens when one or more blood clots block the arteries or fatty deposits or plaque build up in the blood vessels. Just over 85 percent of stroke patients fit into this category.

A hemorrhagic stroke occurs when a vessel inside the brain breaks, thereby causing blood to leak into the cerebrum. Weakened vessels may take the form of either an aneurysm or an arteriovenous malformation, known as an AVM.

An aneurysm is defined by a vessel that balloons out and ruptures. An AVM, on the other hand, develops when a blood vessel is abnormally formed, thereby causing it to rupture and bleed.

During a stroke, as many as 2 million cells can die each minute during the event. As a result, the condition can lead to brain damage, a permanent disability or death. In many instances, a series of mini strokes, known as transient ischemic attacks (TIA), may proceed the event.

Symptoms of a Stroke

Often referred to as a brain attack, the symptoms of a stroke can include the following:

While a stroke occurs suddenly, the symptomatology may span out over time. For instance, patients may feel a mild kind of weakness initially. Over time, that weakness can lead to more severe symptoms, such as paralysis.

If TIAs occur, patients may note gradual changes in the way they walk, understand others or respond behaviorally. In many cases, TIA symptoms are difficult to recognize as they are often attributed to the aging process or are considered to be related to a current health condition.

Stroke survivors often experience sensory deprivation, feeling prickly or tingling sensations in their weakened limbs. When this occurs, the symptom is referred to as paresthesias. In addition, survivors may lose their ability to control the bladder muscles or bowels as well.

Nervous system damage can be the basis for neuropathic pain, resulting in chronic discomfort in specific areas of the body. One of the areas affected in this respect is the thalamus, the part of the body that processes sensory details and relays them to the brain. Pain can also be associated with weakness or paralysis. For example, patients who experience paralysis in the arm frequently feel a radiating type of pain.

Rehabilitation is necessary to correct pain or discomfort as a lack of movement can cause what is referred to as a “frozen” joint. A caregiver uses a therapy, called passive movement, which involves flexing the paralyzed arm in order to lessen the pain.

Besides using physical therapy for rehabilitation purposes, treatment may extend to occupational and speech therapies. Approximately 25 percent of stroke survivors experience speech impairments or aphasia. Patients may also find it difficult to swallow – a condition that is known as dysphagia.

Stroke rehabilitation may also include the treatment of apraxia. Apraxia is defined as an inability to follow and carry out the steps needed to proceed with a task. When apraxia affects one’s speech, it is known as dyspraxia, a disorder that makes it difficult for a patient to say what he wants to convey.

In addition, stroke patients frequently require psychological or psychiatric care as they often feel one of a variety of emotions. Feelings of anxiety or depression can emerge that result from either psychological trauma or damage to the brain.

Physicians prevent a second stroke from occurring by managing the patient’s blood pressure and eliminating or reducing such risk factors as obesity, alcohol consumption and smoking. Neurologists and psychiatrists are also part of the rehabilitation team.

Contributions of the Healthcare Team

Speech therapists or pathologists assist aphasic patients in learning how to speak and assimilate information. They also help patients whose swallowing has been affected by a stroke. Rehabilitation for a stroke patient should begin within 48 hours of the event.