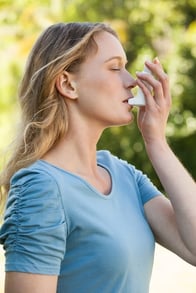 COPD stands for Chronic Obstructive Pulmonary Disease and is characterized by progressive damage to the airways that carry air into the lungs, as well as to lung tissue. This damage gradually reduces pulmonary function, causing breathing difficulties. If you have been newly diagnosed with COPD, you are likely to have a lot of questions about this disease and how it will affect your life in the coming years.

COPD includes two basic lung conditions: chronic bronchitis and emphysema. Chronic bronchitis is a condition that involves inflammation and thickening of the airways, narrowing them to obstruct proper airflow. Inflammation also increases production of mucus, further restricting airflow by clogging airways. Emphysema involves progressive damage to the alveoli, which are tiny air sacs in the lungs that expand when you inhale, then contract when you exhale. In emphysema, damage to the alveoli causes them to lose their ability to stretch, impairing lung function. Most people with COPD will have symptoms of both of these lung conditions.

COPD is most often caused by habitual smoking, which causes constant irritation in the linings of the airways and causes lung tissues to lose elasticity. Other potential causes are chronic exposure to secondhand smoke, high levels of air pollution, and occupational hazards like dust, chemicals, or asbestos. In rare cases the disease can be caused by genetics, an inherited issue called alpha-1 deficiency.

Symptoms of COPD vary from one person to another according to the severity of airway obstruction and/or damage to lung tissue. In the early stages of COPD, there are often no or few noticeable symptoms. When symptoms do become present, they may include chronic cough and increased mucus, shortness of breath during physical activity, frequent respiratory infections, and fatigue.

As COPD progresses, more serious symptoms generally occur, which may include shortness of breath during everyday activities, wheezing, weight loss, and low oxygen levels in the body that, in severe cases, may lead to cyanosis, which causes a bluish tint in fingernail beds and lips due to oxygen deprivation.

There is no cure for COPD, but with proper medical treatment and self-care its progression may be slowed, reducing its impact on your life. Treatment will typically include medications to aid in controlling COPD symptoms and prevent symptom flareups, called COPD exacerbations.

Inhalers are prescribed for most COPD patients. There are two basic types: rescue inhalers and maintenance inhalers. Rescue inhalers contain medications called fast-acting bronchodilators that relax muscles in the airway for better airflow. These provide immediate relief when breathing is labored, and their effects typically last from 3 to 6 hours.

Maintenance inhalers may contain medications that include long-acting bronchodilators to open airways and corticosteroids to reduce inflammation. These are used daily to help maintain more efficient lung function and prevent exacerbations. While they do not provide immediate relief like rescue inhalers do, they are extremely important to controlling the disease and should be used every day, exactly as directed – even if you aren't having symptoms.

Lifestyle changes can also aid in controlling COPD symptoms. Quitting smoking is crucial to preventing further lung damage. Good nutrition can help control inflammation and symptoms, and appropriate regular exercise can help maintain lung function and strength. Specialized breathing techniques can help when you're short of breath, and pacing yourself during daily activities can avoid overexertion that can prompt episodes of breathlessness and increase your risk of serious, long-term complications. Your doctor may recommend a pulmonary rehabilitation program, which can help you learn about the impact of these lifestyle changes and put them into practice.