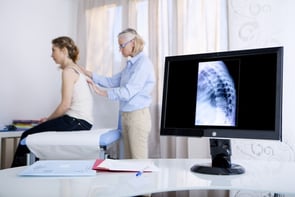 Osteoporosis is a condition that results in the weakening of an individual's bones. Typically, this occurs in the latter stages of life. Those that have osteoporosis have a higher risk of experiencing a bone fracture. In fact, because their bones are weakened, there's a chance that they may damage one of their joints – knee, wrist, and hip fractures are some of the more common osteoporosis-related injuries, which often necessitates joint replacement surgery.

Bones are made hard and dense by the minerals they contain, such as calcium and phosphorus. The body needs a regular supply of these minerals in addition to the production of hormones, which include growth hormones, estrogen, testosterone, and more, in order to maintain the proper bone density. The body also requires vitamin D in order to absorb the calcium. Because a lot of pressure is put on an individual's bones over their lifetimes, these bones are continuously breaking down and reforming. During this process, bone tissue is removed and replaced with new bone tissue. Bone is formed quicker than it is broken down during the first 30 years of a person's life, which means that they are strongest during this period. However, as a person ages, bone begins breaking down faster than it is formed, causing bone density to become more fragile, which can eventually lead to osteoporosis.

There are a number of factors that result in the development of osteoporosis, but some of them are unavoidable. Age, sex, race, family history, and body frame size all have an impact on the risk of developing osteoporosis. Risk factors that can be controlled include dietary factors, such as the intake of calcium or any eating disorders a person may have; excessive alcohol and tobacco use; and a sedentary lifestyle.

Because osteoporosis causes the bones to become less dense, individuals with the condition are more at risk of experiencing a bone fracture. This can happen when they fall or can even occur during everyday movements like stepping off a curb or down a stairway. Fractures can occur at the joints, which will then often require joint replacement surgery.

New joints are typically made out of plastic or metal, although sometimes they are made out of a combination of the two. The surgeon will often cement the prosthesis into place so that the bone can grow into it. The joint can be put into place without being cemented, but it requires good bone quality and is typically only done for younger patients as it takes longer to heal as well.

Because osteoporosis causes the bones to weaken, a person with the condition is more likely to experience a bone fracture. This can happen in the joint areas of their bones, which in turn could require a joint replacement procedure.