10 Dietary Choices That Can Improve Memory 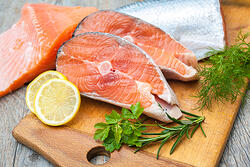 Memory loss is a problem that many people face as they reach middle age and beyond. For most, it is a fairly minor –  but very annoying – problem, with small instances of forgetfulness, such as misplacing the car keys, forgetting appointments or having difficulty recalling names. If you've spent entirely too much time lately being annoyed or embarrassed by small memory lapses, you should know that there are things you can do to improve your memory, including increasing brain-healthy foods in your diet.

Here are 10 dietary choices that can help prevent or improve memory loss:

Other foods that can especially helpful in supporting brain function and memory include wheat germ, which provides lots of choline and magnesium, red cabbage, which is chock full of antioxidants, and pumpkin seeds, which are rich in glutamate, a  nutrient that aids in the production of brain chemicals that reduce stress. Of course, eating these brain-boosting foods as part of a healthy, varied and nutritionally balanced diet is the best way to support both brain health and overall health and well-being.